Darold Knowles was actually traded to the Phillies prior to the 1966 season (for reliever Jack Baldschun, who was flipped to Cincinnati in the Frank Robinson trade). Knowles became the go-to guy in an otherwise aging Phillies' bullpen in 1966. He led the staff with 69 appearances, and notched 13 saves (9 more than the next guy).

After the season, Darold was traded to the Senators for outfielder Don Lock. He spent 4+ seasons toiling in Washington, then was traded to the Oakland Athletics in May 1971. Knowles appeared in the post-season for the A's in '71 and '73. After the 1974 season, Darold bounced around for 5 more years (Cubs, Rangers, Expos, Cardinals) before being released by St. Louis in May 1980. 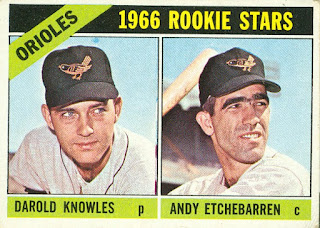 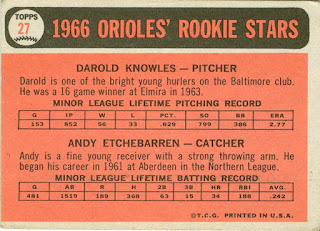 It's strange that these "rookie stars" cards didn't say which way the players bat or throw. 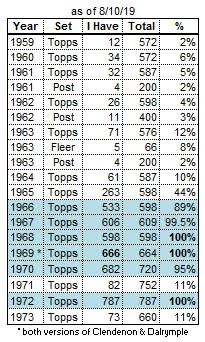