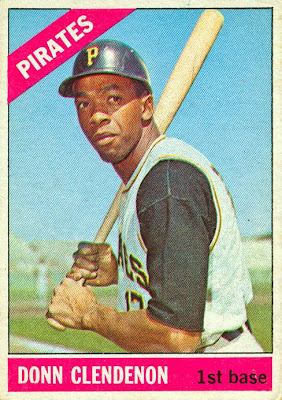 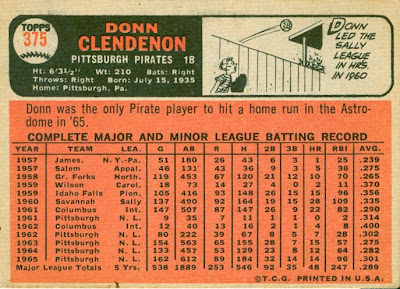 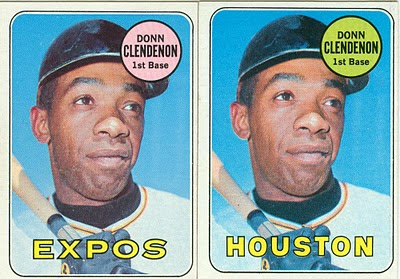 After his playing career, Clendenon earned a law degree and practiced law in Ohio. Later in life he battled drug addiction and leukemia. He passed away in September 2005 at age 70.
Posted by Jim from Downingtown at 1:56 PM 1 comment:

Although he famously played all nine positions during one game in 1965, he was mostly a shortstop. He did play a few dozen games in the outfield during his first 2 seasons, and in his final 2 seasons was a backup at 3B and 2B, but otherwise was found at shortstop for 94% of his career 19,123 innings played.

Bert was signed by the Kansas City Athletics in 1961, and made his major-league debut with Kansas City in July 1964. "Campy" shared the shortstop job with Wayne Causey for the 2nd half of the season, while also starting 27 games in left field. Bert was named to the Topps All-Rookie team in 1964. 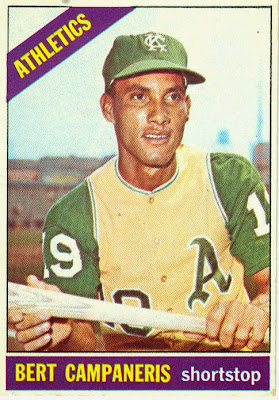 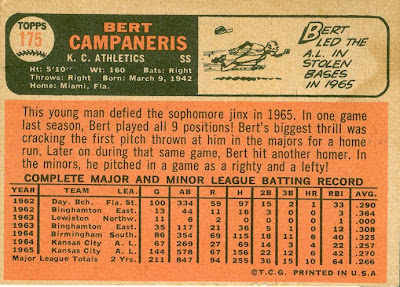 Campy became a free agent after the 1976 season, and signed with the Rangers. He had a good first year in Texas, making the all-star team for the final time in his career. He began the 1978 season as the starting shortstop, but was relegated to the bench for the final 2 months.

In May 1979, he was traded to the Angels for infielder Dave Chalk. Campaneris played the next 3 seasons with the Angels, sharing the shortstop job with others for 2 seasons, then becoming the backup 3rd baseman for the 1981 season.

Bert was granted free agency after the 1981 season, but with no takers, he played the 1982 season in Mexico. He returned to the American League for his final season in 1983, dividing his time between the Yankees and their triple-A team.

Here is one of the multi-team rookie cards that Topps put in their 7th Series in the mid-to late 1960s. Normally, these rookie stars cards have 2 to 3 players from 1 team, but in the last series, Topps had these "catch all" cards to pick up random rookies not already featured. (The Rod Carew rookie card in 1967 is another example.)

Bart Shirley was a utility infielder briefly for the Dodgers in the 1960s. This is his rookie card, but he also appears on a Mets Rookies card in 1967 and on his own card (as a Dodger) in the 1969 set.

After the '66 season he was selected by the Mets in the Rule 5 draft, but after 6 games with New York, he was returned to the Dodgers in mid-May. He was immediately assigned to the minors, and only saw major-league action again during the last 2 months of the 1968 season, playing in 39 games. 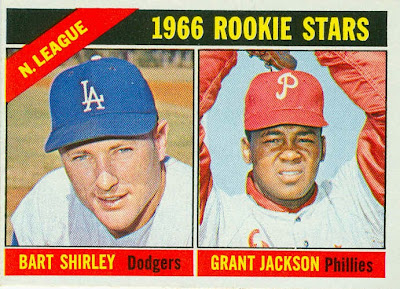 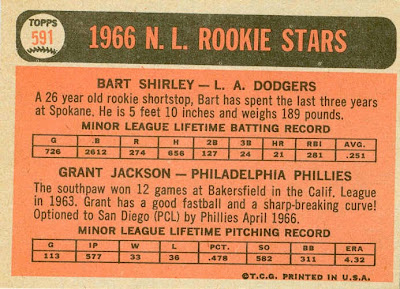 This is also Grant Jackson's rookie card, but unlike Bart Shirley, Jackson went on to a long career with the Phillies, Orioles, and Pirates. He appeared on a Phillies Rookies card in the 1967 set, then had his own card in every set from 1968 to 1982.

Jackson made his major-league debut with the Phillies in September 1965. After 2 games in 1966, he made the Phillies for good at the start of 1967. After long stints with the Orioles and Pirates, he played briefly with the Expos and Royals before retiring after the 1982 season.

You can read more about Jackson here.
Posted by Jim from Downingtown at 11:38 AM No comments: 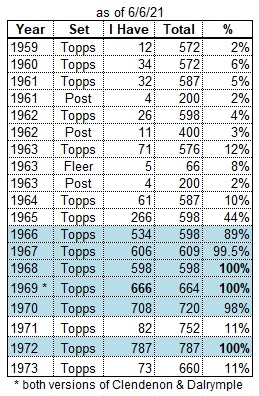